The Astronomy Major at Cornell University is designed to be flexible so that it can be customized to the needs of each student. There is a common core set of courses followed by two concentration paths:

1) Astrophysics Concentration is designed for those who intend to go on to graduate school in the physical sciences such as Astronomy, Physics, or Engineering.

2) General Astronomy Concentration is intended for students who do not plan on research careers in astronomy, but may have more broad intellectual interests, and are interested in related career paths, such as education or public outreach. The flexibility offered by the General Astronomy Concentration make it suitable to be elected as second major by a broad group of students.

TO APPLY for an Astronomy Major make an appointment to visit Professor Gordon Stacey, Director of Undergraduate Studies (astronomydus@astro.cornell.edu). 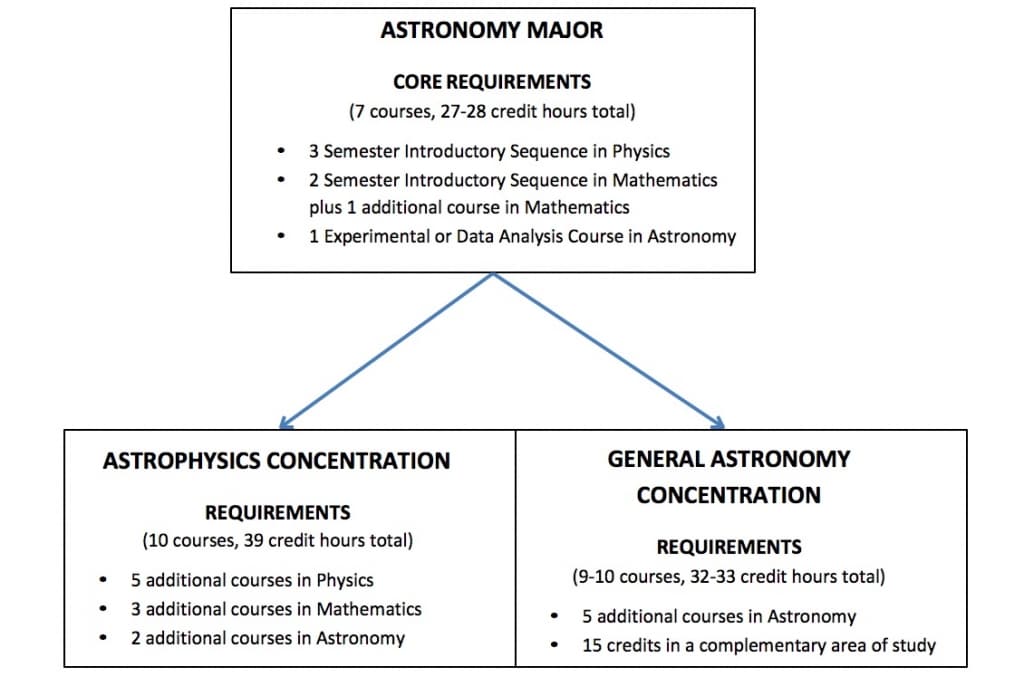 The Astronomy Major consists of six core courses in Physics and Mathematics and a laboratory course in Astronomy that are required for every concentration (27-28 credits total), plus additional courses specifically called out to meet the needs of each individual concentration.  To enter the major, a student must have completed at least two Physics, and two Mathematics core courses as listed below with a GPA of at least 2.7.  To count towards the major, the minimum grade for any required course is C-.  The major is normally entered into after consultation with the Director of Undergraduate Studies (DUS) in astronomy during the student’s fourth semester of work at Cornell.  The DUS and student together will also select a suitable faculty advisor in the Field of Astronomy at this time. The required core courses are:

Three semesters of Physics including:

Three Semesters of Mathematics including:

One Laboratory Course in Astronomy chosen from (required to finish, but not enter the major):

For those pursuing an Astrophysics Concentration, ASTRO 4410 is required.

In addition to these core requirements, each Astronomy Major must complete a Concentration in either Astrophysics or General Astronomy, which is an additional set of 9-10 courses concentrated in areas relevant to their future career goals.

Two Semesters of Advanced Astrophysics selected from two of the three courses in the ASTRO 4431, 4432, 4433 sequence:

Five Semesters of Physics including:

Three Semesters of Mathematics including:

It is highly recommended that the student with an Astrophysics concentration have at least one semester or one summer research experience under the guidance of a faculty member in the Astronomy Field.

Course/Credit Count.  The requirements for the Astronomy Major with an Astrophysics Concentration are therefore 16 courses totaling 66-67 credit hours.

Five Semesters of Astronomy including ASTRO 2211 (Stars, Galaxies and Cosmology) and ASTRO 2212 (The Solar System: Planets, Small Bodies and New Worlds), two of the three courses in the ASTRO 3301, 3302, 3303 sequence, and one additional astronomy course selected from below:

Other Astronomy courses may qualify with prior approval of the DUS.

A student may be granted honors in Astronomy upon the recommendation of the Astronomy Advisors Committee of the Astronomy faculty. Typical requirements for graduating with honors are a minimum GPA of 3.5 over the past four semesters and grades of A– or better in:

It is expected that some Astronomy majors, especially those with General Astronomy Concentrations will have double majors, either totally distinct from Astronomy, or ones that include courses from their Complementary Area. In these cases, their Complementary Area credits can be counted for both majors as allowed by the second major. For example, students may double major in Astronomy and Mathematics with the Astronomy Core MATH courses counted towards both majors.  However, it is not allowed to double major in Astronomy with an Astrophysics Concentration, and Physics due to extensive overlap of requirements.

The Astronomy Minors at Cornell University are designed to be flexible so that it can be customized to the needs of each student.  There are three concentration paths:

2) Astronomy Minor is designed for those students focused on astronomy.

3) Data Science in Astronomy Minor is designed for students interested in astronomy and data science. 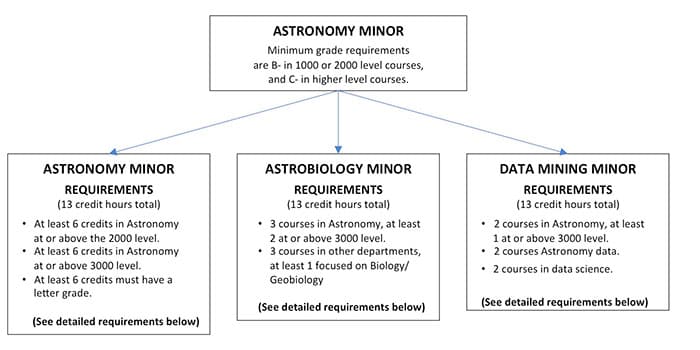 Non-Astronomy majors from all Cornell colleges are eligible to earn a minor in Astronomy.  Minimum grade requirements are B- in 1000 or 2000 level courses, and C- in higher level courses. Independent study (ASTRO 4940) can qualify for the minor with approval by the Astronomy DUS.

TO APPLY for an Astronomy Minor make an appointment to visit the Director of Undergraduate studies (astronomydus@astro.cornell.edu).

The Astrobiology Minor is designed for students who are interested in the search for life in the universe, the origin of life on Earth, the evolution of life on Earth, possible life in the Solar System and on Earth-like planets orbiting other stars. The minor provides a cross-disciplinary frame work linking selected Astronomy courses with appropriate courses in Earth and Atmospheric Science, Biology and Science Communication, including:

b.  3 courses in other departments from the list below, at least 1 of which must be from the first 3 courses which are focused on Biology/Geobiology.

The Data Science in Astronomy Minor is designed for students with interests in data science and its applications to topics in astronomy. The minor provides a cross-disciplinary frame work linking selected Astronomy courses with appropriate courses in Computer Science, ECE, Information Science, Statistics and Data Science, and ORIE including:

a.  Two courses in Astronomy from the list below, at least 1 of which must be at or above the 3000 level.

b.  Two Astronomy data oriented courses from the following:

This includes 1 course in probability and statistics, and 1 course in data structures and algorithms, modeling, and/or machine learning with choices influenced by the particular astronomy emphasis, availability of courses, and consultation with the Astronomy Director of Undergraduate Studies and, if relevant, the instructor of a data-oriented Independent Studies Course (e.g. ASTRO 4940)

The Astronomy Minor is designed for students with interests focused on astronomy and astrophysics in general and demonstrates a level of interest and competence that is appropriate for pursuit of a wide variety of careers. The Astronomy Minor requires completion of a total of 13 credit hours in Astronomy at or above the 2000 level. At least 6 of these credits must be at or above the 3000 level, and at least 6 of the 13 credits must have a letter grade. All 3000 level courses or above count towards the requirements. The 2000 level courses that count towards the requirements include:

All courses in astronomy, except ASTRO 1700 may be used to fulfill the science distribution requirement in the College of Arts and Sciences.