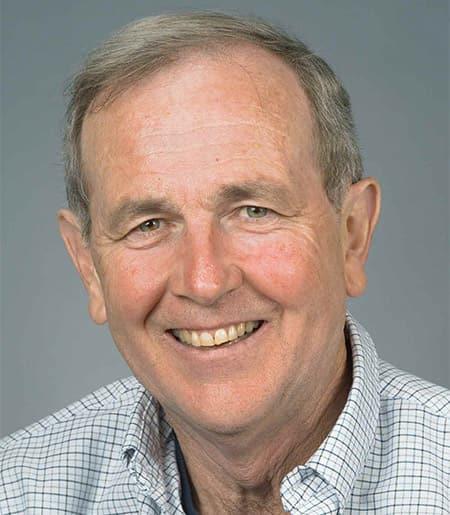 Joe Burns received his Ph.D. from Cornell in 1966. He was Cornell's Vice Provost of Physical Sciences and Engineering between 2003-2007. At Cornell, Joe has taught undergraduate courses in mechanics, applied mathematics, astronomy and physics; on the graduate level, his teaching includes celestial mechanics, mechanics of the solar system, classical mechanics and applied mathematics. His B.S. in naval architecture was obtained from Webb Institute in 1962. In addition to his activities in Ithaca, Burns was an NRC post-doc at NASA's Goddard Space Flight Center in 1967-68, was a Senior Investigator during 1975-76 and again in 1982-83 at NASA's Ames Research Center, was also Visiting Professor of Astronomy during 1982-83 at the University of California-Berkeley, and visited the Lunar and Planetary Laboratory of the University of Arizona in 1989-90. He attended the Kavli Institute (UCSB) in Spring 2008 and was at the Isaac Newton Institute (U. Cambridge) in Fall 2009. Burns has also spent extended leaves in Moscow (1973), Prague (1973), and Paris (1979, 1984).

Burns is active on planning and interpreting results obtained by the Cassini mission around Saturn. He has recently organized exhibits of Cassini results that have appeared at the American Museum of Natural History (NYC) and the National Air and Space Museum (Washington), among other venues. His current research concerns planetary rings and the small bodies of the solar system (dust, satellites, comets and asteroids). Generally, Joe and his students are interested in developing analytical and numerical models to explain puzzling observational data concerning the solar system. Burns is a member of the imaging teams for the Cassini (Saturn) and Rosetta (European comet) missions, and was an associate of the Galileo imaging team. Joe has assisted former students in their discoveries and interpretations of many irregular satellites in telescopic observations and of faint rings in spacecraft data.

Joe was editor of Icarus between 1978-1997. He has edited two books, Planetary Satellites (1977) andSatellites (1986). He is at work on a celestial mechanics text. He currently sits on Science's Board of Reviewing Editors and is an Associate Editor of Icarus and of Celestial Mechanics and Dynamical Astronomy. He has been the Vice President of the American Astronomical Society, and has chaired its Divisions for Planetary Science (DPS) and on Dynamical Astronomy (DDA). He is the President of the IAU's commission on celestial mechanics and dynamical astronomy. Burns is a fellow of the AGU and the AAAS, a member of the International Academy of Astronautics, an honorary fellow of the Royal Astronomical Society and a foreign member of the Russian Academy of Sciences. In 1994 he received the DPS's Masursky Prize.