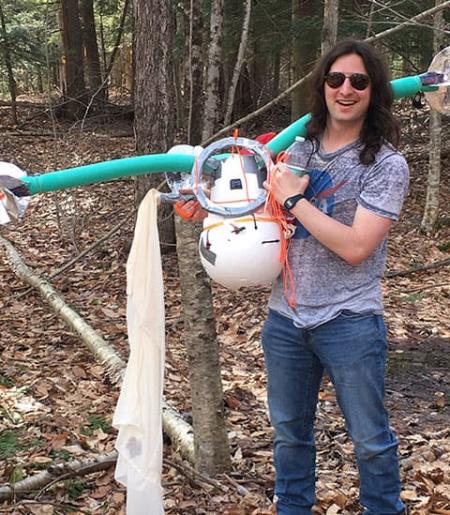 I study the carbon cycle on Saturn using occultations by the planet of background stars observed using the Cassini spacecraft. Saturn's atmosphere is mostly made of Hydrogen and Helium, with Methane being the third most abundant species at about 0.5%. Methane interacts with UV light in the upper atmosphere to form more complex organic molecules which diffuse downwards through the planet, where the higher temperature and pressure breaks them back down into methane. This cycle is driven by UV insolation, and therefore is dependent on latitude, season, and ring-shadowing. Cassini's 13 Earth-year (almost half of a Saturn-year) mission in orbit around Saturn provides a rich dataset to study this dynamic cycle.

This process is similar to what we think happened on the early Earth, whose first atmosphere was mostly Nitrogen and Methane. The Earth, however, has a surface upon which the complex organic products collected instead of being converted back into Methane, allowing these organics to collect and form the pool of ingredients that likely led to early life.

This process is also similar to the chemistry that is happening in the Nitrogen/Methane atmosphere of Saturn's largest moon, Titan. Like the early Earth, the complex organic products of this photochemistry collects on Titan's surface, creating surface features made of tar and dunes made of grains of plastic. Titan also has an active hydrologic cycle similar to the early (and current) Earth, with rain, rivers, lakes, and seas of liquid methane (instead of the Earth's water) carving through this organic-rich terrain and mixing the different chemical constituents together.

Of the worlds whose atmospheric chemistry is dominated by this process, Saturn is the only one for which we have a significant dataset. Understanding this photochemical carbon cycle on Saturn will help future research understand this process on the early Earth, and also predict what the Dragonfly spacecraft will see when it arrives on Titan in 2034.

I was a TA for six semesters at Cornell, two of which I taught a class that I independently developed. The class was ASTRO 1104, an optional one-credit laboratory section for the ASTRO 1102 "Intro to Astronomy: Our Solar System" course. In the class, students proposed designs for a stratospheric weather balloon payload with a $600 and 800g budget, then negotiated these down to a single design, then constructed the payload, soldered the components, and programmed the microcontroller, then finally launched and recovered the weather balloons. All designs included a camera, a temperature sensor, and a pressure sensor. Other student-designed experiments include a CO2 sensor, a speaker and microphone to demonstrate the decreasing ability of the air to carry sound waves with high altitude, smaller balloons filled with air and paint that popped at specific altitudes, creating a "splatter-pattern" on a canvas, and an undeveloped roll of film to collect cosmic rays. I will unfortunately be unable to continue TAing because I have been selected as one of NASA's FINESST grant recipients.

Although I am no longer TAing, I continue to do various outreach events in the Finger Lakes area. I try to develop civil scientific literacy through programs with the Cornell Department of Astronomy and Space Sciences, the Spacecraft and Planetary Imaging Facility, the Museum of the Earth / Paleontological Research Institution, and the Cornell Cooperative Extension.

Before coming to Cornell, I worked with Joe Harrington at the University of Central Florida studying exoplanet atmospheres.

In my spare time I hike the beautiful Finger Lakes area, play video games with my friends across the world, and keep a close eye on policy and politics on the local and national levels.