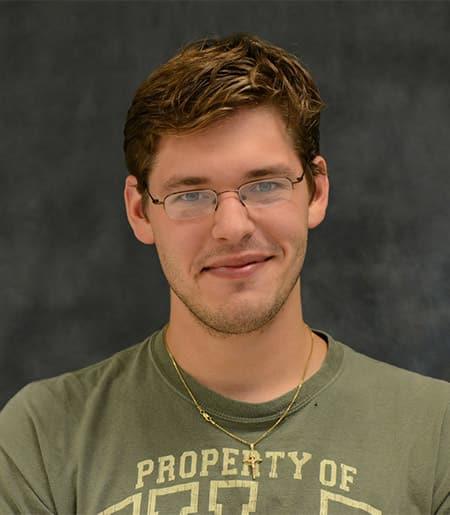 Nicholas “Nic” Walter-Scott Kutsop is a 5th year PhD candidate advised by Professor Alexander G Hayes as a part of the COMPASSE (Comparative Planetology and Solar System Exploration) Research Group [http://hayesresearchgroup.com]. He receives additional advisement from Professor Jonathan Lunine, as well as Dr. Christophe Sotin, and Dr. Bonnie Buratti at the Jet Propulsion Laboratory. His thesis is on the spectrophotometric properties of icy solar system bodies. On Titan (Saturn’s largest moon) Nic uses infrared and radar data from the Cassini spacecraft to describe the correlations between types of terrain and their composition. At Pluto, Nic uses high resolution color images taken by the New Horizons spacecraft to characterize the haze in Pluto’s atmosphere. Nic is involved in mission development, for the Europa Clipper mission and CAESAR (Comet Astrobiology Exploration Sample Return) mission. He specializes in trajectory analysis and spacecraft pointing using the Navigation and Ancillary Information Facility’s SPICE infrastructure [https://naif.jpl.nasa.gov/naif/].

Nic was awarded the NASA Earth and Space Science Fellowship in 2018 and the New York Space Grant in 2016 for his work on Titan’s surface composition. He is also partially funded by the Jet Propulsion Laboratory and spends his summers and winters working there with collaborators on Titan, Pluto, and mission development. Nic has worked as a teaching assistant in both undergraduate and graduate. As a graduate student, he has mentored several undergraduates working with Dr. Hayes and other graduate students on projects involving Europa, Titan, and comet 67/P Churyumov-Gerasimenko. He participates in and leads outreach events organized by the Astronomy Department at Cornell, the Astronomy Grad Network, and the Spacecraft and Planetary Imaging Facility.

Outside of work (if such a thing exists) Nic spends his time hiking, playing video games, and spending time with his family. He is a proud uncle of 14 nieces and nephews and begrudging brother of 6 sisters. He is also a practicing Catholic and enjoys sharing his passion for faith and science with others, especially as an educator to local students. Nic’s ultimate dream is be the principal investigator on a mission of his own design. In particular, he would like to lead an orbiting imaging spectrometer of Titan, Uranus, or Neptune based on the Visual and Infrared Mapping Spectrometer aboard the Cassini satellite or a Martian rover designed to explore caves and lava tubes.