On the eve of fall semester classes starting, Cornellians spied the sky – with special safety glasses – to view the partial solar eclipse Aug. 21 over Ithaca. From Libe Slope to the Fuertes Observatory to Collegetown, students, faculty and staff paused in the afternoon to appreciate the cosmic wonder.

Karen Perez ’19, outreach coordinator for the Cornell Astronomical Society, enjoyed her first eclipse at the Fuertes Observatory, where about 2,500 people craned necks to gawk at the seemingly slow-motion action. Perez and other club members handed out about 600 solar viewing glasses provided by Cornell’s astronomy department.

Telescopes equipped with solar filters and pinhole intakes projected a solar image about 12 inches in diameter onto a white board. “It was pretty amazing, and I didn’t expect to see sunspots, but I saw sunspots,” Perez said. “Through solar glasses, you could see the shape of the moon and the sun, but in the projected image, the sunspots were quite clear.”

From Oregon to South Carolina the ribbon of totality’s shadow – about 70 miles wide – wended its way to the delight of millions. In Ithaca the moon started crossing the sun at 1:17 p.m. and the maximum eclipse occurred at 2:38 p.m., when it gnawed through 70 percent of sun. Only an hour before, clouds had obscured Ithaca’s view, but blue skies prevailed just in time.

Rushaniya Fazliyeva ’18 of the Cornell Astronomical Society said she was excited to see the eclipse. “For me, it was a little overwhelming,” she said. “This might have been my second solar eclipse, but I was quite young for the first – and it is hard to remember. But today it’s fun to see people so happy. They seem eager to see more.”

Patricia Fernandez de Castro Martinez, an editor in the astronomy department, organized the Fuertes event by ordering the glasses for free distribution and coordinating graduate students as event docents.

A total solar eclipse crossed campus Jan. 24, 1925. Professor Samuel Boothroyd and Lowell Observatory astronomer Earl Slipher set up to study and photograph the sun’s corona. Ithaca will be just south of the shadow of totality for the April 8, 2024, solar eclipse.

This article originally appeared in the Cornell Chronicle 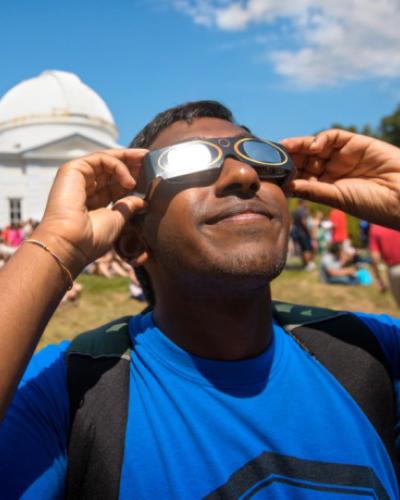