As a child, Ray Jayawardhana walked the Sri Lankan night with his father, marveling at the glory of the stars twinkling above them – and wondering.

That experience inspired Jayawardhana – now the Harold Tanner Dean of the College of Arts and Sciences, and a professor of astronomy – to become an astrophysicist, one who cares deeply about sharing with others the sense of wonder that motivates him. In addition to his numerous scientific papers, he’s written two award-winning books for adults and made public engagement a cornerstone of his career.

Now a father himself, Jayawardhana has written his first children’s book, “Child of the Universe,“ published March 17 under Random House’s “Make Me a World” imprint.

The story begins with a father and daughter looking together through a bedroom window; the text is from the daughter’s perspective: “We look at the moon from the edge of my bed/’The universe conspired to make you,’ he said.”

The book “effectively and eloquently affirms the importance of a single life amid the vastness of the universe – a small lesson under the blanket of parental love,” according to a starred review in Kirkus.

The lush illustrations by Raul Colón depict the child protagonist encountering the grand sweep of the cosmos, from atoms to exoplanets to galaxies.

“The beautiful pictures,” Jayawardhana said, “make it easier for a young child to share in that sense of magic, of grand possibilities: to be curious about what all this means.”

The book aims to fuel children’s imagination and aspirations by sharing “the deep and enduring links – both physical and poetic – between the universe and us, and to nurture a sense of wonder about the great beyond,” Jayawardhana wrote in his author’s note.

But inspiring wonder is not Jayawardhana’s only goal: As a science communicator, he also wants the children reading his book – and their parents – to gain some scientific understanding about humanity’s connection with the cosmos.

“Our connections to the universe run much broader and deeper than the idea that we are stardust,” Jayawardhana wrote in his author’s note at the end of the book. “Important molecules were forged in the core depths of the cloud from which our solar system formed, and comets and meteorites have continued to deliver water and organic materials to the Earth. Some of these collisions with larger bodies may have in fact shaped evolution of life on Earth.”

These concepts are not just interesting history, Jayawardhana wants his audience to know. He wrote: “Giant solar flares not only produce spectacular auroras but also disrupt satellites, air travel and power grids, making our technological society vulnerable to ‘space weather.’”

Just as the illustrations of the book help to convey the excitement of scientific exploration, so too does the author photo at the end – Jayawardhana floating in zero gravity, on a European space agency parabolic flight.

“The sensation is like swimming without water because there’s no resistance,” Jayawardhana said. “There’s a sense of freedom. It’s fantastic.”

Perhaps one day, Jayawardhana hopes, a child inspired by “Child of the Universe” will take a flight even further than that, to explore science among the stars. 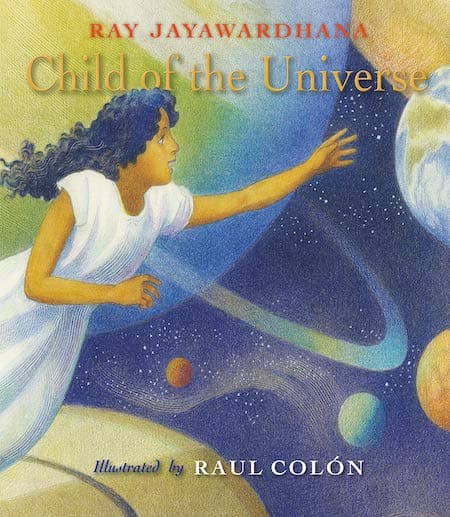